Walking in a Winter Wonderland

A fun walk with my little dog, Ginger. She is sporting adorable yellow Pawz booties; and her winter overcoat. With the extreme cold weather we've been having she has happily used the pee pads provided, but we simply had to take advantage of the yummy sun and warm temperatures yesterday.

This was her first time wearing booties, and I have no doubt how much they helped her to enjoy her walk. The tractor had not yet come by to clear the snow from the night before, and yet she did not mind walking in it. She has previously attempted to stand on only one paw (rather unsuccessfully).

and sharing a new link today...
Choose to live before it is too late

I can attest to the hospital parking lot being full.
That day I looked at it as an inconvenience...
today I will think of all the people in the building;
and I will think of home.
Posted by Shari at 12:02 PM 3 comments:

The following words are copied  from Michayla Roth; she wrote them when she launched her blog:
This Extraordinary Life at michaylaroth.com

They have profoundly touched me, and I really wanted to share them here with you.

Life is made up of them. Some of them are exhilarating, others depressing. Quite a few of them are actually downright boring. There’s no way of knowing when one moment will end and when the next will begin or if a moment that began in joy will end in pain, and vice versa. But one thing is true about all of them: they are fleeting.

That’s part of the beauty of life. No moment lasts forever. They come and go, and though we cannot hold them, we know that more will follow, and who is to say that those will not be more lovely than the ones we cling to now? Through all the changeableness of life, through the moments we hold tightly and the ones we wish would end, there is one constant, and that is the One Who created us.

God’s goodness to His people never changes. His plan of redemption never changes. And His promise of life unending will never change either. Someday, if we cling tightly to His hand and follow Him through fire and bliss alike, we will find life that has no end. We will no longer see in moments but in eternity, and all that we called beautiful in this life will be as pale glass and fallen ash in comparison.

This life is just a dressing room for that one, and moment by moment, our chances to make this life something worthwhile are slipping away.

We Support You - blog hop

Kwilt Krazy
This was/is to be my final hop for a while...honestly I don't even have it in me to begin. It is a beautiful pattern and I will be making it. I am going to be making this pattern into a pillow case for my aunt.
Thank you for all your wonderful comments on my last hop post. All your words were very much appreciated. Please don't worry...we are improving. Been sick with the flu last week, still trying to find our energy. Going to work regardless...they are sick there too and there are few if any available as replacements. Hope you are feeling better too Carol.
Happy Stitching! Thank you so much Mdm Samm and Pat!

Made By Me In Red

Stitchin By The Lake

Seams To Be Sew

Creatin' In the Sticks

Everyone Deserves A Quilt 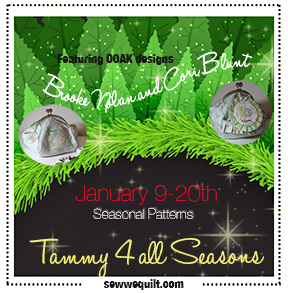 Living with Purpose
Grammie Q's
Stitchin By the Lake
Ipiece2-Mary
Just Let Me Quilt
My most sincere apologies . . .
I am finding myself incapable of completing these exquisite patterns by Brooke Nolan and Cori Blunt in this wonderful hop of Mdm Samm and Mary.
Working on the winter vintage pattern, I grabbed some white 14ct Aida, and used tea to stain my fabric...I'm about 1/2 way through the dress, and I added pearls to the stole. I have some beautiful angora floss to fancy it up...but I am having difficulty working on it...or anything else for that matter. 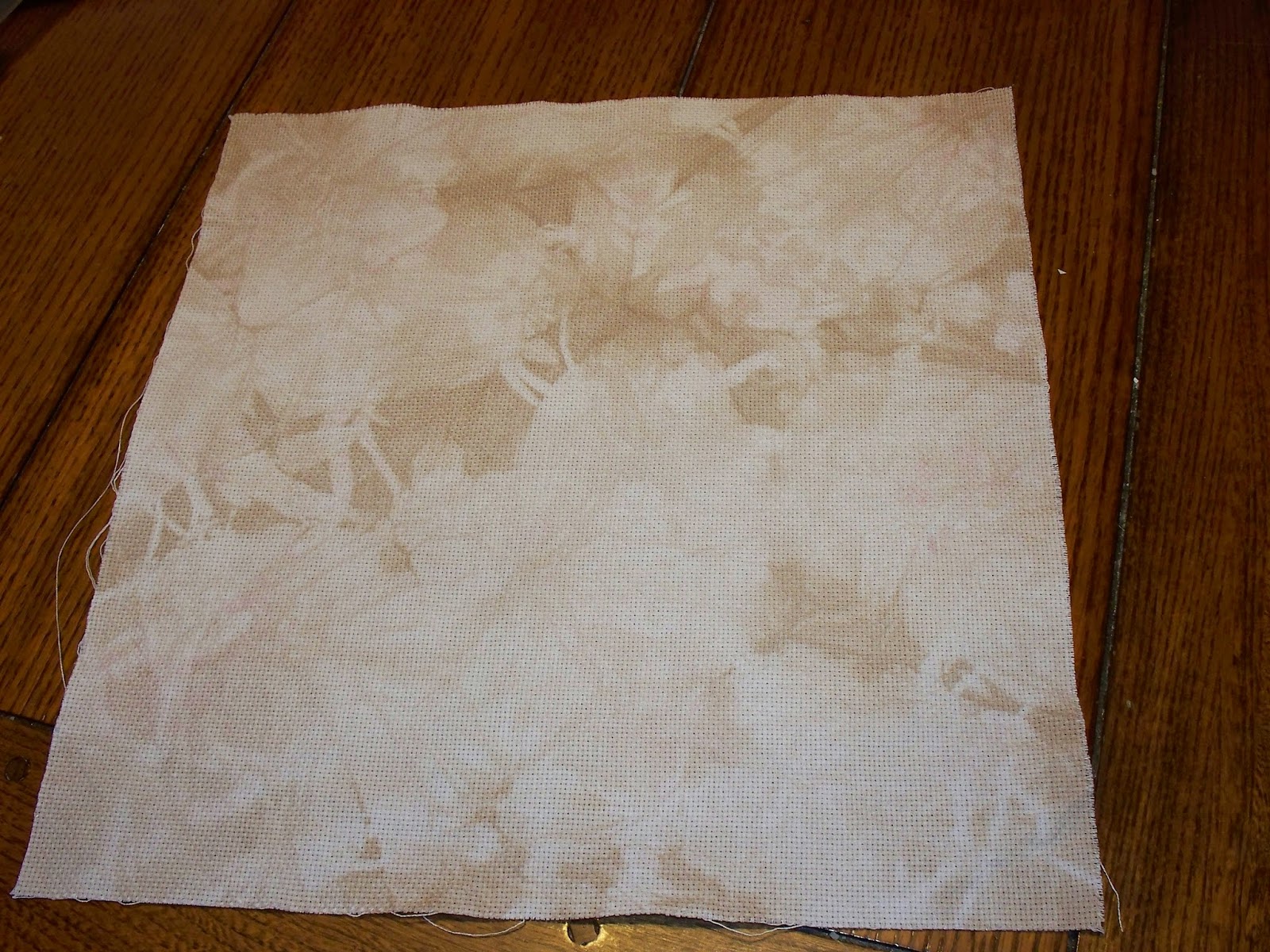 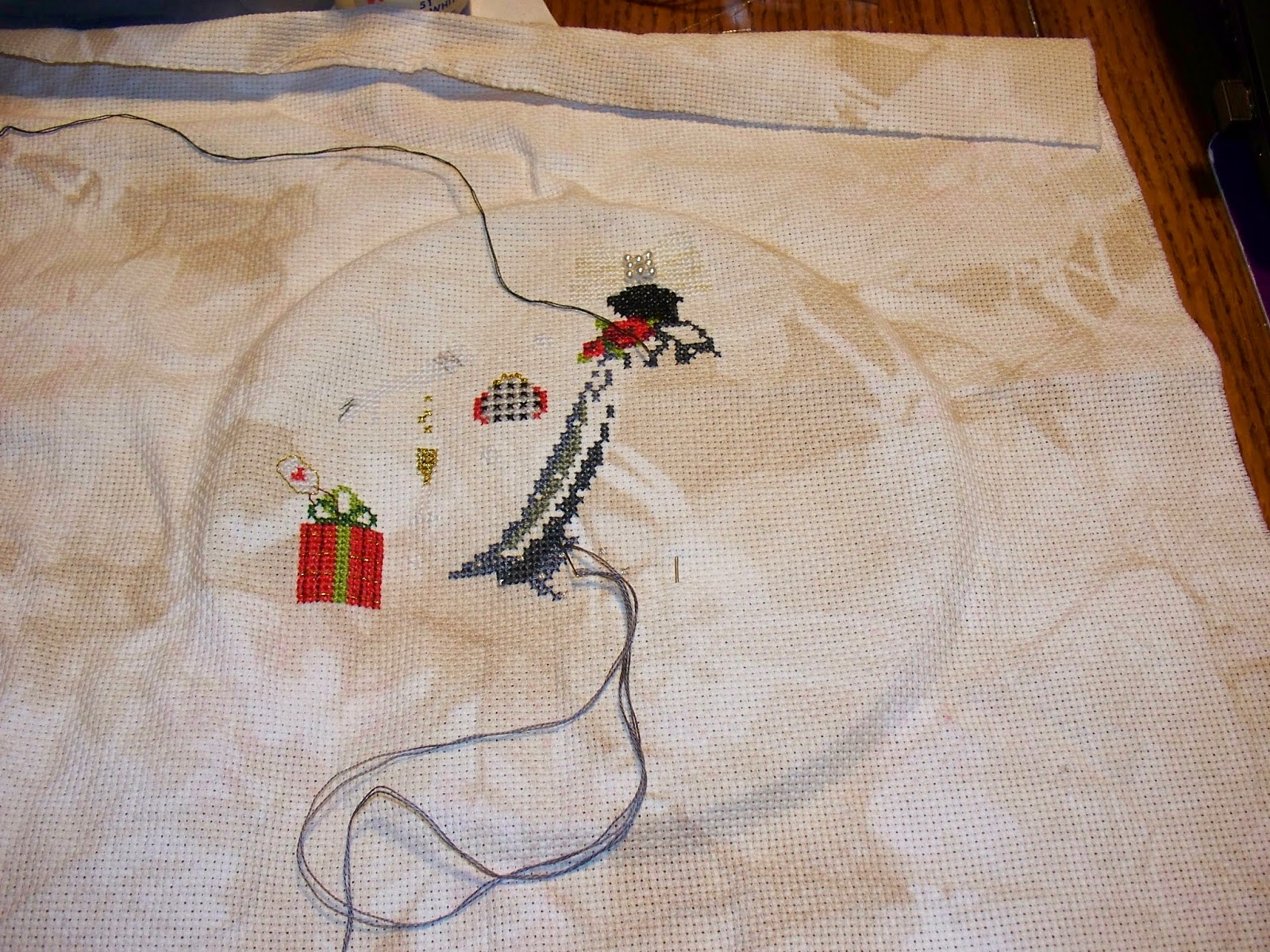 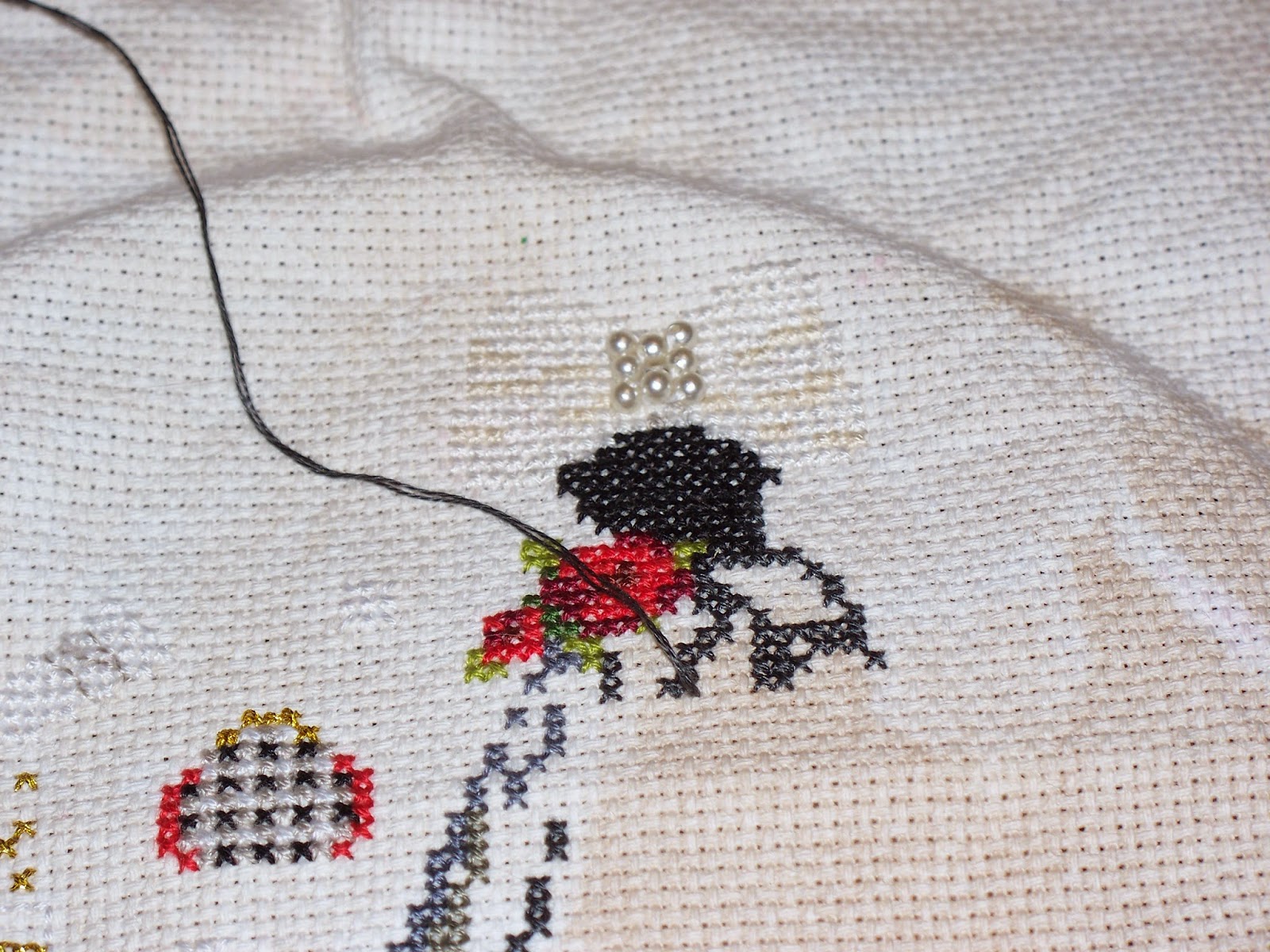 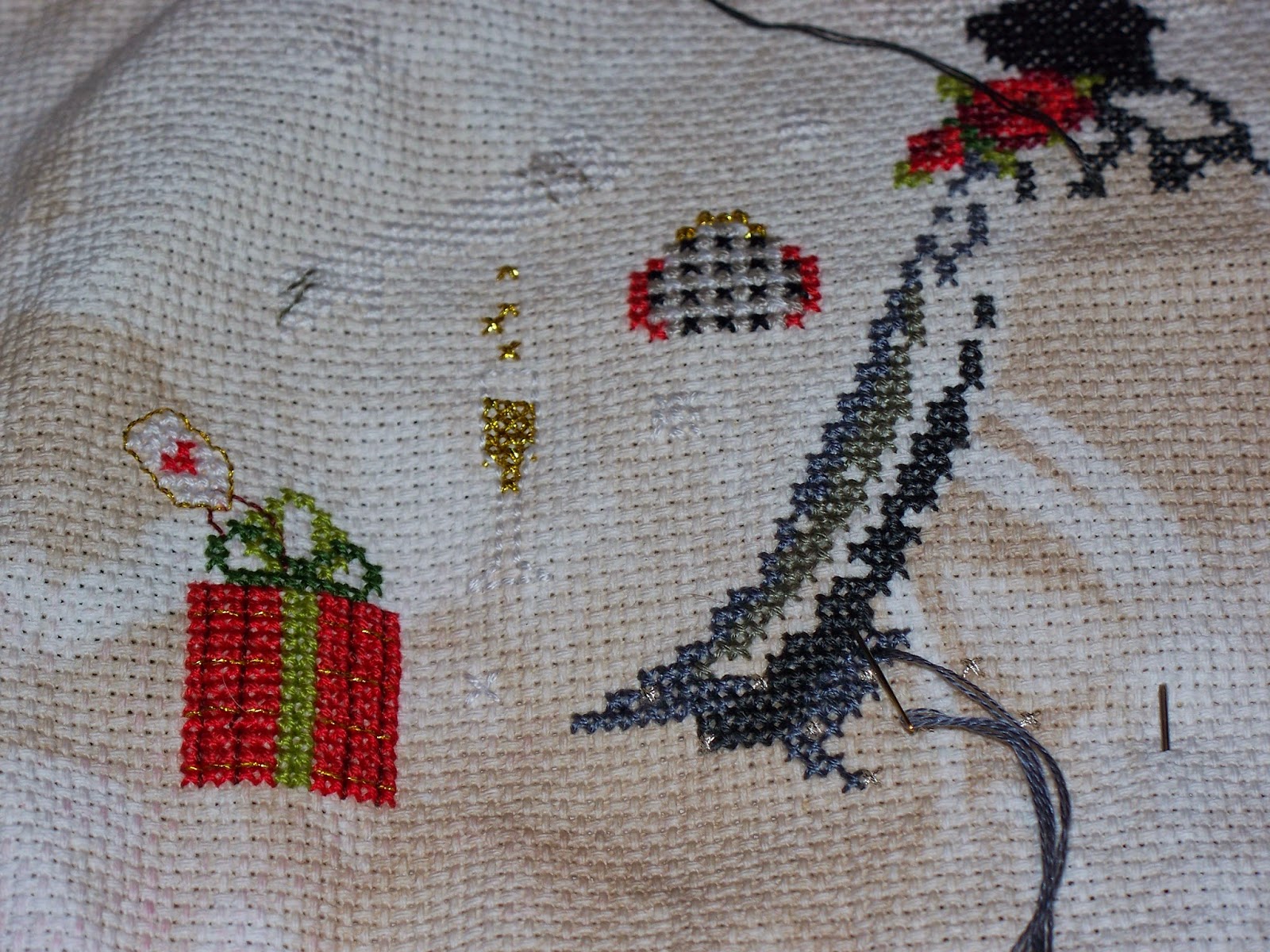 I'll be stepping away from hops and other ...a-longs till I get my bearings. I'm finding my boat tossing among the waves; which without a doubt means that I am not taking care of business.
Please accept my apologies. Thank you
Posted by Shari at 7:48 AM 45 comments:

What I did yesterday


You may remember my goodbye post from last December. Puddles was the puppy we got from a friend the second summer we were in this house. She developed cancer of the facial mask and at her age it was better to put her down.

This house has now been almost a year without a dog. I don't think I have ever gone that long without a poochie. If nothing else it really gave me time to mourn the loss of my friend. Dh and I have been discussing getting a new dog for a while. This time we wanted a small dog; actually we have decided to each get our own. But we don't want puppies, and we prefer to "rescue" them.

We had a lead two weeks ago on a small poodle type, that the lady was looking for a new home for her two year old dog because she was moving into a residence and could not take it with her. I debated about whether or not we were ready, especially as we are moving into the winter season. By the time I called, the dog was already promised...but to her granddaughter, so I was pleased for them.

Moving on, I decided to check out a local shelter website that I used to visit often, but only found a German shepherd. Too big for us! Though there was mention of a yorkshire becoming available soon, so I emailed them on Wednesday, spoke to the lady on Thursday who would have brought the dog by that afternoon, but I was on my way out to work so that was impossible. Told her I would be by on the weekend.

Yesterday morning, I checked the website before we left, and now there was a picture up of a chihuahua. Dh does not like this breed, yet amazingly enough told me to check out both dogs when we got there and see if  "either one does it for me". So off we went...it is like a 45 minute drive one way. Can you believe that the yorkshire was adopted on Friday?!

So I got to meet the chihuahua. The lady at the shelter is not sure how old she is, but she seems in good form. She does not bark, she may be deaf or almost deaf (I really cannot confirm this yet). She is so very, very tiny weighing in at about 4 lbs. But she looks like a fox, and is ginger coloured. I left her in the car with my husband for 5 minutes while I went to check out a beagle (NOT happening!) and when I came back, Dh and "Ginger" had bonded. So I now have my very own chi chi! I was concerned what would happen if the original owner came looking for her, but was told highly unlikely as she had been a "drop and run" at the shelter. The lady also lowered the price as the yorkshire was gone before I got there. This ended up being perfect, as it was exactly what I needed to spend on food, leash, and dishes.

She and Harpo the cat are getting along okay. I am so glad! I got a free doggie pillow when I bought the bag of dog food...just perfect, she has spent the night there. So far though she prefers the taste of the cat's food to hers. I'll have to talk to the vet about that, as that is where I buy my kitty food...special urinary tract stuff as Harpo is prone to infection. Not cheap! but cheaper than the vet bills for sure.

Anyway...here are the two photos I snagged from the shelter's website...just until we can start taking our own. She is a cuddly little thing! 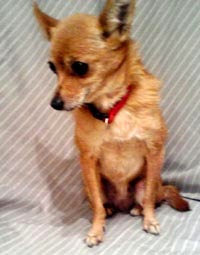 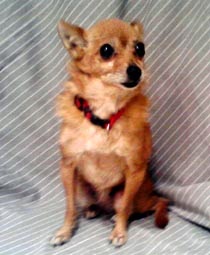 I am a proud new mom!

You don't have to go far these days to here of someone affected by cancer.

When Mdm Samm learned of some near and dear within our quilting community were afflicted she did what she does so well
and put forth her cry  asking if any are willing
to create and celebrate community.

We Support YOU ! was born.

This is the newest hop created and hosted
by Mdm Samm of Sew We Quilt
and organized and cheered
by Pat Callihan of Life in the Scrapatch.

Join us in a worldwide community celebration of love and hope
by making a 3' x 2 1/2' bra in support of those with cancer.
Pattern designed and provided by Mdm Samm
free of charge to hop participants

Just think what you could do with this creation . . . wall hanging, tote bag, pillow, and the embellishments . . . embroidery, applique, whatever your sew creative mind can come up with!

Think how loved and SUPPORTED
these courageous people in your life will feel.
Or make a great charity gift item . . . there are no limits.

Visit this link for all the information and sign up directions.

I can't wait to show MY support
this awful disease has/is afflicting several of my friends and family.

I understand that there are still a few spots in the

Fab, fab, fabulous cross stitch - pinny - tammy bag hop.
Click on the image for the link to learn more.
Posted by Shari at 9:19 AM 4 comments:

Shari
I'm a Christian wife, mother, daughter, sister, aunt, grandmother, and friend. I like to learn new and varied creative pursuits seeking enjoyment from them as I go.

Verse of the Day